Furniture boss Phillip Dickens was given a three-month suspended prison sentence today after his company supplied a cot that trapped a child by the neck. 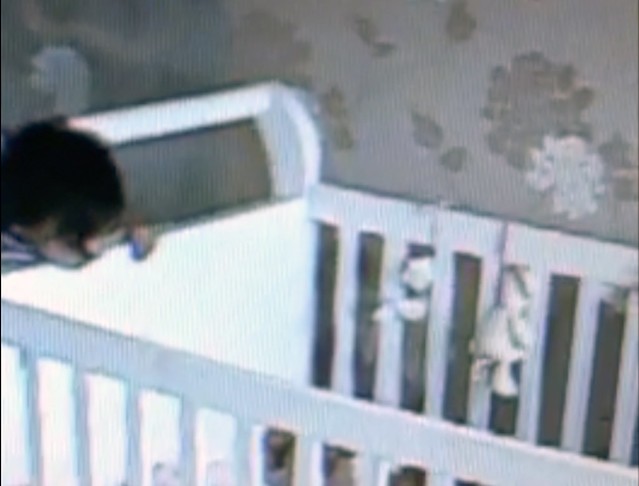 Ophelia getting into difficulty in her cot from her mother’s video monitor. Click the image to download

On behalf of his company, Oxfordshire-based Baumhaus, Mr Dickens had admitted two counts of placing an unsafe product on the market, between January 2010 and July 2013, at an earlier hearing on March 16.

The court heard that Buckinghamshire resident Louise Conant bought one of Baumhaus’s Nutkin three-drawer cotbeds for her 19-month-old daughter, Ophelia.

On April 16, 2013 she put Ophelia in the cotbed for her lunchtime sleep, and was monitoring her via a video monitor system when she noticed the toddler getting into difficulty.

She hurried upstairs to find her daughter hanging by her neck, which had become lodged in a gap between the end of the bed and a horizontal handrail.

Nine days later, Northamptonshire mother Deborah Turner, who had also bought a Nutkin cotbed, found her son dangling on the outside of the cot with his forehead jammed against the horizontal handrail.

As a result of Mrs Conant’s complaint to Trading Standards, officers took away the cotbed, found the supplier Baumhaus, and confronted them with the problem – and a copy of a video of Mrs Conant’s daughter in distress.

Trading Standards told Baumhaus to alert customers to the unsafe cot, which they did. Following test reports and an offer from Mr Dickens to give Mrs Conant a part-refund, Baumhaus was served a product recall notice in July 2013, which recovered 93% of the 212 cotbeds sold.

Thames Valley Police visited Baumhaus in October and seized computer equipment. A month later Mr Dickens, a director, was interviewed under caution during which he confirmed the company had designed the Nutkin cotbed, which was produced in China and imported back into Britain for distribution.

Alex Greenwood, prosecuting, told the court the prototype had been tested and passed in 2010 but the product placed on the market in 2013 had different dimensions. Mr Dickens, he said, had no proper quality control in this country.

In mitigation, Sunyana Sharma told the court neither Mr Dickens nor Baumhaus set out to harm children with their cotbed, and the company accepted that it failed in not having proper quality control, but had acted quickly to remove the product from distribution, all of which were accepted by Judge Holt.

She said the company had done all it could to trace the remaining cots.

Judge Holt described this as a serious offence but said the court acknowledged naivety and negligence on the part of the defendant, who at the time had no manufacturing experience, kept no technical product notes, and relied on an external company for testing to assess compliance with relevant British Standards

Of the cotbed incident involving Ophelia, Judge Holt said: ‘One can only imagine the horror that mother must have felt.’ She awarded both mothers £1,000 each in compensation. 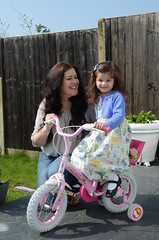 Louise and Ophelia Conant at home

Ophelia’s mother, Louise Conant, said later the court case brought an element of closure to the nightmare experience of seeing her daughter trapped by her neck in her cot. Time, she said, was healing, but it was a slow process.

‘I bought what I thought was the best for Ophelia – a premium quality cot bed. But it turned out to be a living hell,’ said Louise. ‘For a long time afterwards it gave me nightmares, and it made me nervous about putting Ophelia to bed.

‘The video monitor definitely saved her life,’ said Louise. ‘I’d never have thought to buy one, but a friend suggested it. Now I’d urge every parent to consider a video monitor for their child – for me it was such a valuable buy!’

Trading Standards Officer Rebecca Kaya, who led the investigation, said the case demonstrated the department’s commitment to protecting families from products posing a safety risk, and was an example of the tough measures they were prepared to take.

She said: ‘This case highlights the need to be very careful buying online. Before clicking the “buy” button, make sure you have a manufacturer’s code, product code and full contact details of the retailer, including a cancellation process in case you need to return the product, or there is a safety problem.’

And she warned: ‘We believe there are still 12 examples of this model of cotbed out there, which weren’t reached by the product recall. Our message is clear to anyone who has one, to check the name and product code, and contact their local Trading Standards department.’

BACKGROUND NOTES
The case was brought by Buckinghamshire and Surrey Trading Standards. Since 1 April this year county councils in Buckinghamshire and Surrey have operated a joint trading standards service which harnesses expertise in both authorities to better protect consumers and give residents and businesses stronger safeguards. Protecting vulnerable people, including children, is a key priority for the new shared service.