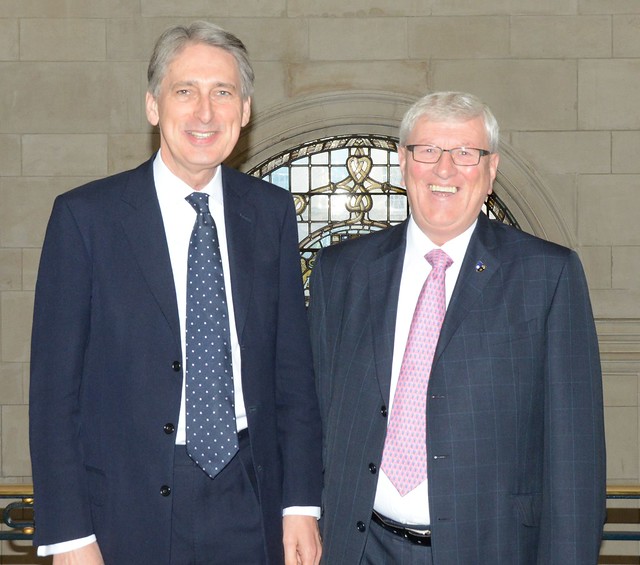 Utility companies, local enterprise partnerships and businesses will be asked to contribute to a £300 million River Thames defence scheme under plans unveiled at a meeting with the government’s flooding envoy Philip Hammond.

Seven councils whose residents and businesses were affected by last February’s floods will work to secure contributions from Thames Valley Berkshire, Enterprise M3 and London Enterprise Panel as well as approaching firms over the next 18 months.

Surrey, Richmond, Windsor and Maidenhead, Kingston, Elmbridge, Spelthorne and Runnymede councils agreed the move together with the Regional Flood and Coastal Committee (RFCC) at a meeting to give the Foreign Secretary an update on the scheme to better protect 15,000 homes and businesses.

At the same time, the councils confirmed their commitment to investing in developing the project during the next five years while the Environment Agency and Thames Water have agreed to work together to look into the water company contributing. Power companies are set to be approached too.

Last month the government increased its funding for the project by £60m, taking the total to around £220m. The RFCC has invested another £30m.

The scheme involves reducing the flood risk along the Thames between Datchet and Teddington by building a flood channel and improving three weirs.

Surrey leader David Hodge said: “The government’s increased funding has made the scheme more achievable but it still leaves it around £50m short, which is tough given the pressures we’re facing on school places and elderly social care.

“That is why we will be seeking funding from utility companies, businesses and local enterprise partnerships whose customers and residents will benefit from the river defence while also committing to contributing towards this vital project ourselves.”

Julia Simpson, Programme Sponsor from the Environment Agency, said: “This commitment from the local authority leaders to fund the scheme and work together to find the remaining funds is great news.

“It shows the strong commitment we have from the partnership of the local authorities, the Environment Agency, the Regional Flood and Coastal Committee and Thames Water to deliver the scheme, which will help reduce flood risk to all communities between Datchet and Teddington.”