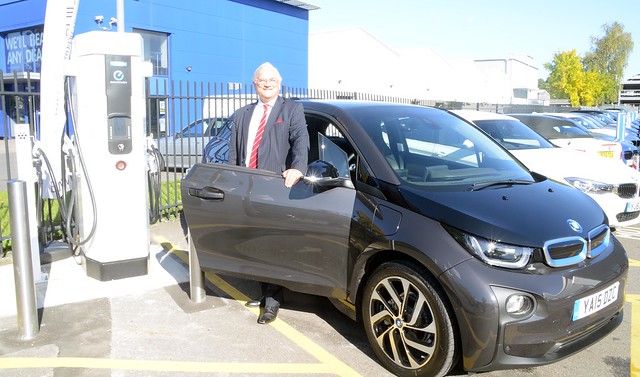 County council deputy Leader Peter Martin unveiled a new speedy charging point as it was revealed that Surrey has more electric vehicles than almost every county in the country.

It has been installed at BMW dealership Vines of Guildford and means vehicles can recharge in less than 30 minutes instead of between three and eight hours normally needed for top ups.

The news came as electric car maker Tesla opened a European factory last weekend ahead of today’s planned launch of a new model.

Adding the latest publicly accessible rapid charger brings the total in Surrey to five as part of the council’s aim of promoting green travel schemes through the Travel SMART initiative*.

There were 682 ‘plug-in’ vehicles registered in Surrey in the quarter between March and June this year compared to 248 a year earlier, according to Department for Transport statistics. The only county with more is Hampshire with 699.

Last year the council hosted a summit designed to spark extra growth in electric vehicles that featured companies at the industry’s cutting edge, including Surrey-based Mercedes-Benz.

Mr Martin said: “It’s fantastic that businesses and drivers in Surrey are accelerating demand for ‘plug-in’ electric cars so this innovative industry continues to boost our economy and the environment.”

* The others are at Reigate Hill car park, Hollyhedge car park, Cobham, and Frimley Park Hospital (two) as part of a network of almost 20 across West Sussex, East Sussex – including Brighton – and Kent.