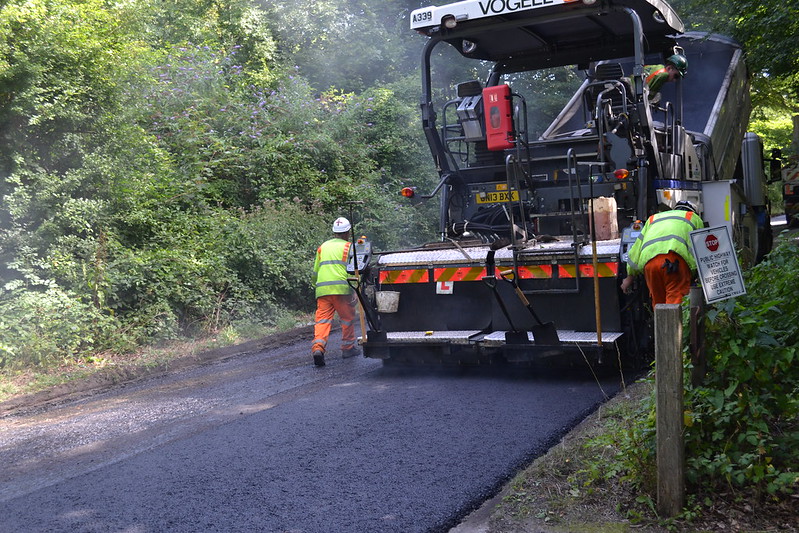 Work being done to completely overhaul a road as part of the Operation Horizon project. Click image to download

Construction giant Kier and Surrey County Council are on the road to launching a careers college to train their own highways workforce.

Plans have been signed off for a construction academy just days after UK Commission for Employment and Skills revealed that the number of positions unfilled through a lack of skills has rocketed by 130% since 2011. That has forced Kier to bus in Surrey staff from as far afield as the Kent and Hampshire coasts.

The training centre is part of plans agreed by the council’s Cabinet to extend Kier’s highways contract by four years, which also feature a scheme to give young people classed as NEET – not in education, employment or training – a leg up on the career ladder.

Former members of the Armed Forces together with people with mental health problems and learning disabilities will also be among those able to benefit from the course to equip recruits with the skills needed to earn an apprenticeship with either Kier or the council.

The initiatives focused on tackling the skills shortage are among a series of measures that will also aim to find £5 million of savings, including a drive to strike better deals with sub-contractors.

Discussions will now begin with the Department for Education to decide whether establishing an academy, university technical college or links with a further education college is the best option for training young people from Surrey and beyond.

Surrey County Council’s Cabinet for Highways John Furey said: “Kier is doing a really good job on our Operation Horizon project to completely overhaul more than 300 miles of Surrey’s roads and this extension will build on that.

“Not only will it create jobs and opportunities for local people, it will also equip Surrey with the expertise to improve our highways and drive forward the county’s powerhouse economy for years to come.

“On top of that, it will also mean giving some of our most vulnerable residents a leg up on the career ladder while benefitting highways services across the region too.”

Nigel Dyer, managing director for Kier Highways in Surrey, said: “The contract extension for Kier delivers value for money and long-term benefits for Surrey – investing in young people and realising the untapped assets in Surrey’s communities.

“We are looking to create new ways of generating our workforce of the future, combining education with real work experience and creating a specialist centre for highway skills development.”