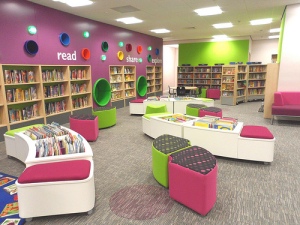 The children’s area in Dorking Library

Children borrowed more than two million fiction books from Surrey libraries in the last year – the highest figure for more than a decade.

It means fiction borrowing by under-13s has risen nearly a third since 2002 – and five per cent in the last year alone.

The most popular children’s book issued by Surrey libraries over the past year emerged as Diary of a Wimpy Kid: The Long Haul – the ninth instalment of Jeff Kinney’s comic series about the trials and tribulations of a 12-year-old schoolboy. It was borrowed 2,231 times.

The figures come from Surrey’s network of 52 libraries, including nine community partnered libraries. They show that the number of fiction issues to under-13s between April 2015 and March exceeded two million over 12 months for the first time in more than a decade with loans totalling 2,007,735.

Children’s non-fiction issues are also rising and peaked this year at 316,234.

All Surrey’s libraries have a dedicated children’s area and support a range of initiatives designed to encourage a love of reading among young people.

These include Surrey Libraries’ own Children’s Book Award, which celebrates the best current fiction for seven to nine-year-olds, and the Reading Agency’s national Summer Reading Challenge which encourages children to read regularly during the long summer holiday.

The under-fives have their own Pebble the Penguin library card, Pebble rhyme times, story times and “Pebble’s Reading Adventure” where children collect stamps on a card for each book they borrow .

The new figures emerged as Surrey County Council’s Cabinet approved plans to relocate Horley Library to a more accessible location and create a service which will better meet the needs of 21st century readers, with a business wi-fi area and leisure study area as well as the usual range of books and other services.

New town centre libraries have already been opened in Walton and Dorking while libraries at Woking and Godalming are among those which have been recently revamped.

Richard Walsh, Surrey County Council’s Cabinet Member for Localities and Community Wellbeing, said: “Encouraging children to use their local libraries is a key priority for us and this big increase in junior book borrowing is great news, both for children’s reading and also the future of our libraries.

“We are committed to investing in the things that matter to our residents and have worked hard to make our libraries inviting and attractive public places offering a range of useful services and access to advice and guidance.”

These are the top 10 children’s book fiction books borrowed from Surrey libraries between April 2015 and March this year.

1. Diary of a Wimpy Kid: The Long Haul

10. Where The Wild Things Are