Surrey’s role in the fight for women’s voting rights to be celebrated thanks to £100,000 National Lottery grant

A project to commemorate Surrey’s role in the fight for women’s right to vote has won a National Lottery grant of almost £100,000.

Surrey County Council’s History Centre has been awarded the grant from the Heritage Lottery Fund to explore and chronicle the contributions that local people made to the cause of women’s suffrage.

Surrey was home to many notable activists and organisations on both sides of the debate which raged for decades, including Mary Seton Watts, a women’s rights campaigner and wife of the famous Compton artist GF Watts, and Dame Ethel Smyth, the Woking composer who was imprisoned for her suffragette activities. The county witnessed key moments in the long-running campaign, including Emily Davison stepping out in front of the King’s horse at the 1913 Epsom Derby, dying of her injuries four days later on 8 June, and Emmeline Pankhurst being implicated in the bombing of a house in Walton-on-the-Hill being built for David Lloyd George, then Chancellor.

The story of Surrey’s role will be told through contemporary letters, photos, books and newspaper cuttings which will be brought together online for the first time. Surrey History Centre holds a treasure trove of information which will be investigated, catalogued and showcased on the Exploring Surrey’s Past website, which will also draw on local suffrage material from five Surrey museums.

There will also be travelling exhibitions, school workshops and other events around the county. Volunteers will be able to learn archive conservation skills to help make the records accessible to the public.

The project – titled The March of the Women: Surrey’s Road to the Vote – will culminate next year marking the centenary of the 1918 Act of Parliament which gave the vote to women over 30. It will be funded through a £99,300 grant from the Heritage Lottery Fund.

Denise Turner-Stewart, Surrey County Council’s Cabinet Member for Communities, said: “Surrey played a crucial and dramatic role in the historic hard-fought battle for women’s voting rights and we’re delighted the Heritage Lottery Fund is making it possible for us to tell the full story and bring it to a wide audience in Surrey and beyond.

“With women’s voting rights now taken for granted, this news is a timely reminder amid a general election of everything that led up to those rights being won. Thanks to National Lottery players, this project will create a lasting record of Surrey’s contribution for generations to come.” 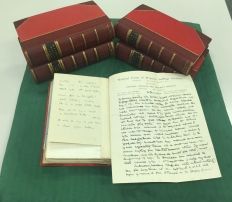 Like Loading...
« Surrey Fire and Rescue Service and RNLI join forces to promote water safety
Pre-inquest review hearing into death of Pte Sean Benton to be held in London »