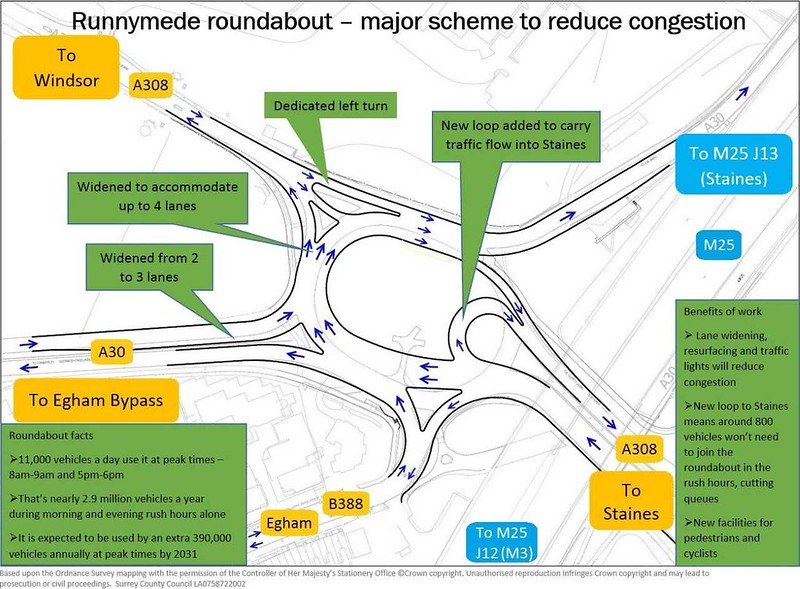 A major scheme will get under way this week to cut congestion at one Surrey’s worst traffic blackspots – Runnymede roundabout.

Nearly 2.9 million vehicles use the roundabout annually between 8am and 9am and 5pm-6pm on weekdays. That rush-hour figure is expected to rise by around 390,000 by 2031.

The roundabout will be widened, resurfaced and a new loop added making it easier to get into Staines. More details can be found on the map above.

Around two-thirds of the funding for the work came from the Enterprise M3 local enterprise partnership with the county council providing most of the rest. The main work on the roundabout will start on Monday 10 July and there will be overnight closures that night and this Sunday.

News about the improvements comes just days after it was revealed that the county council was part of a new body called Transport for the South East that aims to improve travel in the region and boost the economy.

Colin Kemp, Surrey County Council’s Cabinet Member for Highways, said: “Good roads help businesses grow and residents go about daily life. This roundabout plays a key role in journeys on the M25 and to Heathrow, Staines and beyond, although the work wouldn’t have been possible for us to do on our own as money is so tight due to the rising need for services like adult social care.

“With millions of vehicles a year already using it in the morning or evening rush hours alone and hundreds of thousands more expected to in the coming years, these improvements are vital for the continued success of Surrey and the South East’s powerhouse economies. We’ll make every effort to keep disruption to a minimum during the work, but we’d also urge motorists to plan ahead.”

Lane restrictions and temporary traffic lights will be in place throughout the project, which is due to last around eight months. Information will be published on Surrey County Council’s website. Email updates are available by signing up on the site.