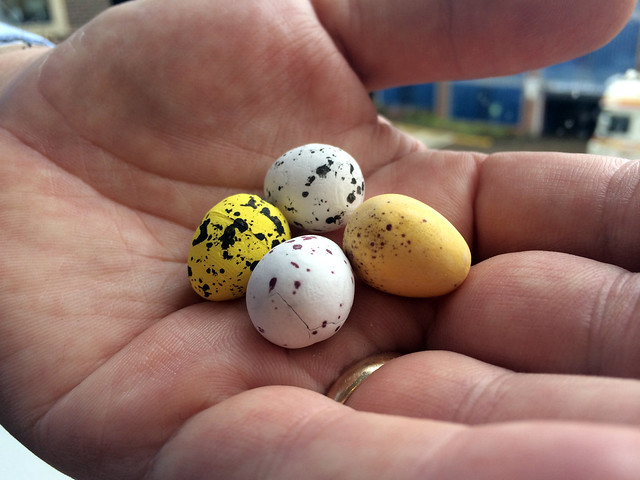 A pair of the decorative eggs pulled from sale alongside two chocolate Mini Eggs. Click the image to view and download more photos.

Easter decorations which look virtually identical to Cadbury Mini Eggs have been pulled from Poundland stores nationwide after trading standards officers based in Surrey warned children could try to eat them by mistake.

Packs of decorative foam eggs imported from China have been removed from hundreds of Poundland stores after Buckinghamshire and Surrey Trading Standards raised concerns that children could choke on them.

Parents are now being warned that similar products which pose a choking risk may be on sale at other shops across the country or online and trading standards teams are now contacting other stores believed to stock similar decorations.

Poundland agreed to take down packs of ‘decorative eggs’ after being advised by trading standards officers that they were likely to contravene food imitation safety rules.

They resemble Cadbury Mini Eggs in size, shape and colour and action to remove them followed a complaint to trading standards from a customer at Poundland’s Redhill branch.

Steve Playle, Investigations and Enforcement Manager at Buckinghamshire and Surrey Trading Standards, said: ‘These products could very easily be mistaken for Cadbury Mini Eggs by young children and swallowed leading to dire consequences.

‘We welcome the actions of Poundland in taking a potentially dangerous product off the shelves and would urge any parent who has already purchased a pack to keep it away from children.

‘Parents should also be wary of similar products being offered for sale over the Easter period at other stores or online.’

The trading standards services at Surrey County Council and Buckinghamshire County Council were merged on 1 April to form a new joint service. The tie-up will harness the expertise of both teams to give consumers even stronger safeguards and businesses an even better service.