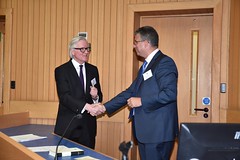 Addressing the ceremony, Mrs Marks said: ‘Of around 11,500 deaths per annum within Surrey, around 4,500 are reported to the Coroner and there are around 750 inquests each year. Each case is different, each has its own particular circumstances and each case must be managed judiciously and empathetically.

‘Where there is confusion the Coroner’s Court works diligently to bring clarity, and through this plays a pivotal role in the process of understanding and hopefully, acceptance.

‘As we continue to operate within a constrained financial environment I hope that these new facilities act as a visible marker to residents that Surrey County Council has, and will continue to, support the work of the Coroner’s Court, both for staff and the general public.’

For more on the new Coroner’s Court, click here

Like Loading...
« Call for volunteers to unearth the story of Wilfred Owen’s military training camp
Former world cycling champion to compete in Surrey »