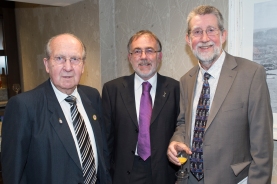 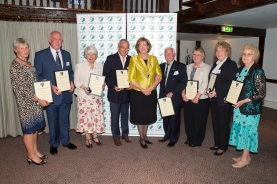 A selection of images from the event can be found on the council’s flickr page.

More than 50 of Surrey’s unsung heroes were recognised for their “incredible work” at an event staged by Surrey County Council Chairman Sally Marks.

The event in Dorking saw volunteers given a certificate and a specially commissioned chairman’s medal that was struck at Pobjoy Mint.

Among those receiving awards included Charles Connell, who delivers meals on wheels three days a week, Edward Hickman a war veteran who walked to raise funds for charity after losing all his toes in battle, and Penny Shoubridge, who has been involved with the Scouts, Brownies and Cubs for more than 30 years in Charlwood.

Mrs Marks said: “It was great to be able to thank so many wonderful volunteers for their incredible work in their communities. I was moved to hear so many examples of selfless dedication and amazed to learn just how long some of the volunteers had been serving.

“Many of them seemed surprised to receive such recognition – humility being another common trait among volunteers. Our county is richer for having such dedicated people helping to make Surrey the wonderful place it is.”