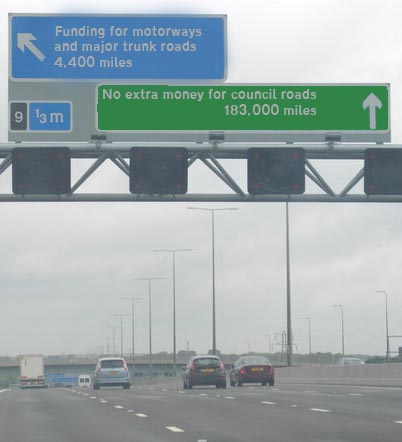 As car sales accelerated to an all-time September high, it was revealed that more than 180,000 miles of roads nationwide are set to miss out on a new highways fund – despite covering more than 41 times the distance of routes that will benefit.

Today’s news that more than 462,000 new cars were registered last month comes after Surrey County Council found that the fund from Vehicle Excise Duty (VED) unveiled in the last Budget has been earmarked for motorways and major A roads managed by Highways England.

They account for around 4,400 miles of roads compared to more than 183,000 miles of highways overseen by councils, according to Department for Transport (DfT) figures*.

It means that roads like the A57 Snake Pass connecting Sheffield and Manchester, the A361 past Glastonbury and the A40 at Witney, Oxfordshire, will be overlooked.

In Surrey alone, just 100 miles of roads will be covered by the fund while 3,300 miles used every day by residents and businesses will not see any benefit despite local drivers contributing more than £100m through VED every year and only around £20m coming back in highways funding.

Surrey County Council Cabinet Member for Highways John Furey said: “From the Peak District pass to the route past Glastonbury, a national network of local highways will not see a penny extra unless the government acts to remove this road block.

“Without a change, more than 3,300 miles of roads in Surrey alone won’t benefit even though local drivers already contribute around £80m more every year in VED than they ever get back for highways and government funding for our roads is dropping by around £1m annually despite the number of miles driven on them every year rising by 100 million since 2010.”

Roads missing out on the fund include:

A full list of road lengths by type and region can be found on the DfT website (table RDL0101). Highways England manages ‘trunk’ motorways and major roads. Councils are responsible for ‘principal’ motorways, major roads and minor roads.

* English councils are responsible for more than 17,500 miles of A roads and almost 166,000 more miles of other roads.

Like Loading...
« Father and son roofing duo sentenced
ROUND UP: Rich history recognised; Deciding your next career step; How to become a county councillor »