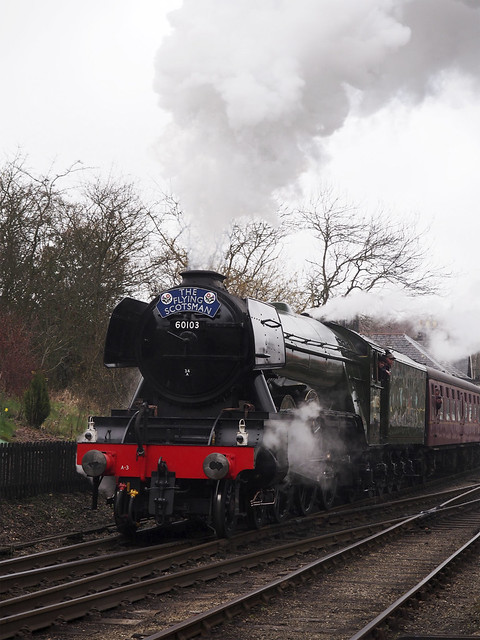 As the iconic Flying Scotsman steamed through Surrey today, it was revealed that just a third of Britain’s railway network is electrified.

Latest Office of Rail and Road figures confirm there are nearly 9,800 miles of routes in Britain, of which 3,275 are electrified.

The electrified routes do not include around 29 miles of the North Downs Line – used by nearly 5.5 million passengers last year – which the famous train was due to visit on lunchtime and evening trips through Surrey as part of a tour of Britain.

Last month Surrey County Council’s Cabinet Member for Environment and Planning Mike Goodman revealed at an event featuring Secretary of State for Transport Patrick McLoughlin that fully electrifying the Reading to Gatwick line would generate around 8,000 jobs and £1.9 billion of economic growth.

Mr Goodman said: “The legendary locomotive conjures up images of times gone by but it’s the future we’re looking towards and that’s why we’re pushing for the North Downs Line to be fully electrified.

“Not only will that create thousands of new jobs, it will give the region’s powerhouse economy an enormous boost and provide faster, more reliable journeys for passengers.”

More information about electrification nationally going back to 1985 can be found on the rail regulator’s website.

People hoping to catch a glimpse of the Flying Scotsman were being warned to stay safe and off the rails.