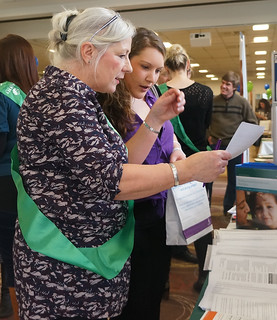 Hundreds of young people are expected to descend on a careers fair organised by Surrey County Council.

The event will give young people the chance to find out more about apprenticeships, further education and training.

It takes place at Epsom Downs Racecourse on Wednesday 2 November (3.30-6.30pm) and the free event is open to the public. More details can be found on the council’s website.

A rogue trader who pressured a pensioner into spending thousands of pounds over two years on unwanted building and gardening work has been given a suspended jail sentence.

Shaw installed a tumble-dryer for his victim, who is in poor health, before suggesting work that needed doing in her Walton-on-Thames home. Over two years between 2012 and 2014, he carried out a number of building and gardening projects but repeatedly pressured her into having more done than she wanted. Much of the work was found to be substandard and not worth the money paid.

Shaw pleaded guilty to an offence under Consumer Protection from Unfair Trading Regulations of engaging in aggressive commercial practices at Guildford Crown Court on 16 August and was sentenced on 11 October. As well as a suspended jail sentence, he was handed a 12-month supervision order. Shaw now faces a Proceeds of Crime Act hearing to recover £10,000 paid to him by his victim.

Young people from Surrey will get a taste of jobs at the council as part of a takeover day at County Hall.

The authority is taking part in the Children’s Commissioner’s Takeover Challenge which sees organisations and businesses across the country open their doors to children and young people and invites them be involved in decision-making.

Those participating will look at Surrey’s approach to apprenticeships, share experiences and views with senior leaders and get an insight into the authority’s work.

The event, which takes place on Friday 18 November, is open to 11-18 year olds and up to 25 years old for people with special educational needs and disabilities. Details about booking a place are available on the council’s website.

Like Loading...
« Jail for cowboy roofers who preyed on elderly residents
VIDEO: Young people urged to apply for highways roles after impressing on trial scheme »