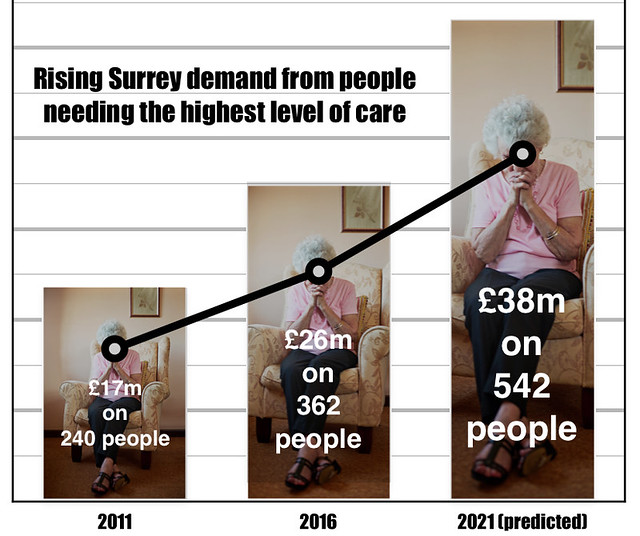 With two-thirds of the council’s spending going on the wellbeing of adults and children, it has been revealed that the number of older people in Surrey needing the highest levels of care from the council soared by more than 50% in five years.

In 2011, 240 people aged over 65 received help from the authority for their complex care needs – support costing more than £1,000 a week. By last year the number had risen to 362, meaning the council spent nearly £9 million more than the £17m it spent five years earlier.

If that rate of growth is repeated to 2021, around 180 additional people with severe conditions would need the authority’s help, adding a further £12m to its spending. That would take the total annual cost of care for more than 540 people to around £38m annually.

At any given time, the council provides support to more than 20,000 adults.

Surrey County Council Cabinet Member for Adult Social Care Mel Few said: “We already spend 65p in every pound on the wellbeing of adults and children and these figures serve to underline that rising demand has brought services to breaking point.

“Not only are we spending around £9m more now than in 2011 on care for people with very complex problems but we face having to find around a further £12m over the next five years to ensure we can continue giving the help our most vulnerable residents rely upon at a time when demand for other social care support, learning disabilities and children’s services is also rising every year.”