These are the serious injuries suffered by a Surrey resident after he started up a gas camping stove he bought online.

The stove engulfed Marcus Oliver in a fireball when he turned it on, leaving him with burns to his face, hands and arms.

Three firms – the retailer, distributor and importer of the product – have now been ordered to pay nearly £45,000, including £4,500 compensation to Mr Oliver, after Surrey trading standards officers took them to court.

The three firms, all based in Bradford*, were ordered to pay fines, costs and compensation totalling £44,469, with each paying £14,483. 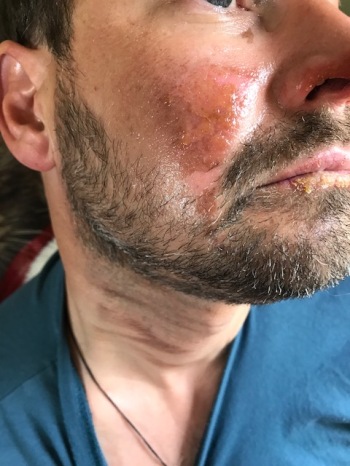 It followed an investigation by Buckinghamshire and Surrey Trading Standards which found that none of the three suppliers had tested the stoves.

Officers sent the stove for independent analysis which uncovered safety failings. It was found to be possible to put the gas canister into the stove incorrectly and operate the stove without the canister being properly fitted, which would lead to gas escaping under pressure. The instructions were found to be so inadequate as to be meaningless.

The stove was also found to lack a rating plate which is meant to display the CE mark and other information. The stoves have now been removed from sale.

The advert for the stove Mr Oliver purchased

Mr Oliver was awarded £4,500 compensation with each firm paying £1,500, plus the statutory victim surcharge.

Denise Turner-Stewart, Surrey County Council’s Cabinet Member for Community Services, said: “This case brings home just how important it is for sellers and suppliers of products to comply with laws which are designed to protect people. I’m pleased these businesses have been brought to justice for failings which led to a customer suffering terrible injuries.

“With camping season in full swing, our advice to people buying equipment like gas stoves is to check they’re labelled with the CE mark and the name and address of the manufacturer or importer and make sure there are clear instructions for use. Taking steps like these may reduce the chances of ending up with a dangerous product.”

The damaged stove after the incident

Anyone who has concerns about a product should contact the Citizens Advice consumer helpline on 03454 04 05 06.