A doorstep rogue trader has admitted fleecing a retired Surrey teacher with excessive charges for substandard work to her house and garden.

Tom Watson pleaded guilty to running a fraudulent business after he was brought to court by Surrey trading standards officers.

Their investigation found that the former teacher, an elderly widow from Stanwell, had paid out £50,000 in just a few months to Watson and his associates.

Watson, 23, of Edward Way, Ashford, Surrey, spotted the woman out in her garden in October 2015 and told her that guttering around her home needed fixing.

Other jobs were then identified around her house and garden, with Watson even driving her to the bank to help her pay for the work.

Over the course of the next few months, Watson, who traded as TW Roofing, and other traders working with him, persuaded the woman to part with £50,000.

They carried out a series of jobs including laying a patio, replastering inside walls and renewing brickwork but she was unhappy with the standard of much of the work and complained to trading standards.

An independent surveyor found the true worth of the works to be no more than £9,000 to £10,000, with up to £2,000 of works needed to remedy damage done, and also questioned the need for some of the repairs.

After pleading guilty at Guildford Crown Court on Friday 22 March, Watson is expected to be sentenced on 26 April.

Denise Turner-Stewart, Surrey County Council’s Cabinet Member for Community Safety, Fire and Resilience, said: “This vulnerable resident was overcharged repeatedly for poor quality work but now Watson is going to pay for his key role in this fraud.

“Our advice is never to do business on the doorstep, no matter how good the deal sounds. We receive lots of reports of doorstep traders offering their services, whether it be gardening, taking rubbish away or roof, driveway or other building works. But dealing with them means you run a greater risk of ending up with an unreputable trader who charges extortionate amounts for shoddy or incomplete repair work.”

Buckinghamshire and Surrey Trading Standards is now investigating to see if any proceeds of crime can be recovered for the victim. 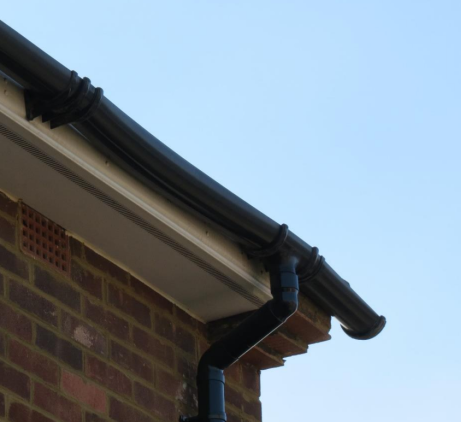 Distorted guttering at the house – which remained unrepaired

Surveyors questioned the standard and necessity of some of the work, including attempts to renew the mortar between brickwork at the house