A skip hire boss who pressured customers into paying extra charges for skips to be removed from outside their homes has been ordered to pay fines and court costs of more than £30,000.

Skips were left on the driveways of some homes for months on end after Place demanded excessive sums to take them away.

The customers involved – who lived in Frimley, Camberley, Aldershot, Wokingham and Leatherhead – had hired building firms to carry out renovation work at their homes and paid for skips to be delivered and collected as part of the arrangements they made with their builders. Place’s company worked with the building firms to provide the skips.

In late 2017, one of the firms with links to Place apparently went out of business while renovation works were still underway at several homes. Even though Place had no contracts himself with the residents, who had already paid for skip removal through the builder, the skip boss demanded money to take away the skips sitting outside their homes.

Place told the residents – who were already in some cases thousands of pounds out of pocket to the building firm – they must pay him money he claimed the builders owed him.

After skips were left on their driveways for several weeks, three customers paid Place out of desperation, handing him sums ranging from £250 to £600. Two customers refused to comply and ended up with skips at their homes for many months.

Two skips were dumped outside a property in Leatherhead

Then in February 2018, a Leatherhead resident dispensed with the services of their builder, who was also working with Place, soon after works had started. Place initially removed their skip but then claimed the builder had failed to pay the correct waste charges and demanded the residents pay instead.

When they refused, he returned days later with a skip full of someone else’s rubbish and dumped it on the customer’s driveway, before demanding £1,200 to take it away. After the resident refused again, Place dumped a second skip outside their home and increased his demand for money to £1,600.

The resident alerted trading standards officers who investigated Place’s activities and arranged for the skips to be removed from the Leatherhead property and the homes of the two other customers who had refused to pay Place. 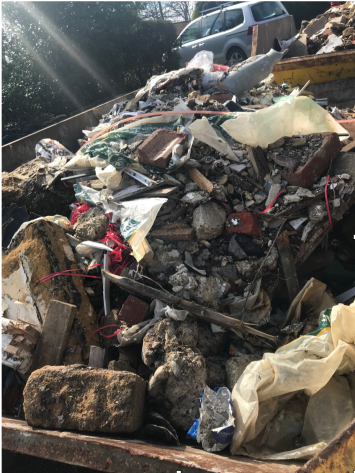 Hampshire-based Place, 43, pleaded guilty at an earlier hearing to five counts of aggressive commercial practice under the Consumer Protection from Unfair Trading Regulations 2008. He pleaded guilty on behalf of 1st Place Grab & Skip Hire to five identical charges levelled at his company.

Denise Turner-Stewart, Surrey County Council’s Cabinet Member for Community Safety, Fire and Resilience, said: “The skips left outside people’s homes caused great inconvenience and Place exploited their desperation to get rid of the skips to pressure them into handing him money, even though they’d already paid builders for the service. We hope this case serves as a warning to any other traders tempted to resort to such practices. Intimidating tactics of this kind simply won’t be tolerated in Surrey.”