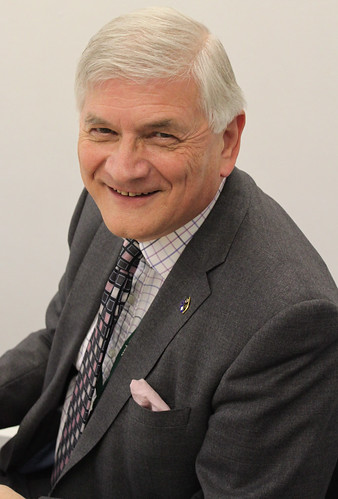 A former minister and Surrey’s deputy leader have convinced the Government that the county should get a fairer deal on road funding.

On the day that the Government unveils its new legislative programme in the Queen’s Speech, Surrey could be set for a bigger share of Government money after a transport minister agreed that national funding rules need to be “fairer”.

At a meeting on Tuesday with roads minister Robert Goodwill, former trade minister Lord Trefgarne and the county council’s deputy leader Peter Martin asked the Department for Transport to change its funding rules so the most used roads get more money.

Currently, Government funding is based on how many miles of road each authority has, and does not factor in local traffic levels or how efficient the council’s highways team is.

Despite only having 3,000 miles of road, Surrey has the third busiest network outside London and is 60% busier than the South East average.

The county council is also spending £23 million on fixing 100 miles of road, more than 20,000 potholes and 30 bridges after suffering some of the country’s worst flooding last winter. And with the Government’s contribution to this fund accounting for just £5.3 million, the Surrey delegation called for the rules to be changed.

Mr Goodwill accepted that Department for Transport funding needed to be fairer in future, and will consult this summer on improving the rules. He also praised the council’s long-term roads plans, such as its Operation Horizon to tackle the root cause of road damage that has already saved £3 million.

Mr Martin said: “Surrey’s £30 billion economy is second only to the City of London, so our work on tackling roads and congestion matters hugely to UK plc.

“But we need more financial help from the Government to fund our long-term plans, so it’s very encouraging that the minister has agreed that the rules need looking at. We hope that this meeting will lead to Surrey taxpayers getting a fairer deal.”

Lord Trefgarne said: “I’m pleased the minister has recognised how very heavily-used Surrey’s roads are, and that Government rules need to change so deserving councils don’t lose out on crucial transport funding.”