Surrey firefighters step in to help paramedics save more lives

Surrey firefighters are stepping in to help ambulance crews gain quick access to the homes of patients who are critically ill and unable to open their doors to paramedics.

They have taken on a new role gaining entry to locked properties in medical emergencies to help the ambulance service save even more lives.

Police have traditionally been called on to force entry to homes on behalf of paramedics who lack the equipment and expertise to carry out the task themselves.

But now Surrey Fire and Rescue Service has become mainly responsible for gaining entry as part of a new initiative aimed at making the best possible use of available emergency service resources.

The project involves fire, police and ambulance services in Surrey working more closely together in the best interests of the communities they serve.

Firefighters are already well-trained in gaining access to properties in an emergency and carry equipment on their vehicles to enable them to do so.

They also carry defibrillators and have received enhanced first aid training to help ensure that casualties at the scene of fires or road accidents are treated as quickly as possible. 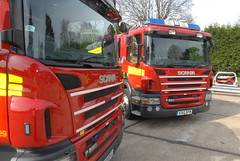 It means that in some medical emergencies where they have been called on to gain entry, they may be able to begin administering care even before ambulance crews arrive, further improving service to the public.

If a patient needs to go to hospital, firefighters will stay at their home until it is secure.

But fire crews’ expertise in gaining entry and the equipment they carry mean they often cause less damage to property than previously.

The initiative is allowing the police to focus on other priorities, while arrangements are in place to ensure that fire service cover is maintained across the county.

Lynne Owens, the Chief Constable of Surrey Police, said: ‘Last year, I was on response duty and attended a “concern for an individual’s safety” call following a request from the South East Coast Ambulance Service.

‘The intention was for police officers to assist with gaining entry to the home of the person needing medical assistance. I immediately thought that this type of call could be dealt with by other blue light partners who are better placed to respond. Surrey Fire and Rescue Service has the legal ability to force an entry to a premises and their staff are well-trained in doing so.

‘Many of the calls that need responding to involve life-threatening incidents and time saved by this initiative could make a huge difference to patients.

‘An additional benefit for the public is that fewer properties have had to be boarded up as a result of the forced entry, which saves the taxpayer money.’

Since Surrey Fire and Rescue Service took on prime responsibility for forcing entry on behalf of the South East Coast Ambulance Service, it has responded to two calls a day on average.

Russell Pearson, Surrey Fire and Rescue Service’s Chief Fire Officer, said: ‘We have always been able to undertake this role but are delighted to do so on a more regular basis. It allows us to provide timely assistance to those in need within the community and support our blue light colleagues, which is beneficial to all. Furthermore, arrangements are in place to ensure that we continue to respond effectively to other incidents affecting life or property when they arise.’

Mark Bailey, Senior Operations Manager for the South East Coast Ambulance Service, said: ‘We are delighted to be working even more closely with our blue light colleagues. This initiative means ambulance crews will often receive much quicker access to patients due to the speed that fire service resources arrive at the scene. Our crew can focus on the patient while fire crews arrange the security of the property, which reassures patients that their property is being looked after if they are taken to hospital.’