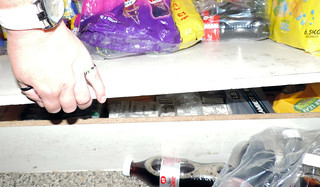 A Surrey shopkeeper was caught with thousands of pounds worth of illegal tobacco when a sniffer dog found secret stashes hidden around his store.

Trading standards officers raided a convenience store in Godalming in September last year and found hundreds of packets of cigarettes and tobacco pouches hidden under a sink, beneath beer and wine fridges and in the cash till.

Surjit Singh, 58, the shop owner, pleaded guilty at Redhill Magistrates Court last week to offences under consumer protection laws and was fined £950 with a £35 victim surcharge and ordered to pay prosecution costs of £1,306.

The court heard that 132 packets of counterfeit Marlboro cigarettes were found in his store – Godalming Local – along with another 50 cigarette packets and 128 tobacco pouches which carried no statutory health warnings.

The 310 products seized would have been worth approximately £4,000 if sold, magistrates were told.

Singh, of Howard Road, Southall, initially denied having any illegal tobacco products on his premises but was rumbled when they were detected by sniffer dog Bradley.

The prosecution was brought by Buckinghamshire and Surrey Trading Standards* following an initiative last year to stamp out the trade in illegal tobacco by Trading Standards South East, a coalition of 19 trading standards services in the south east of England. 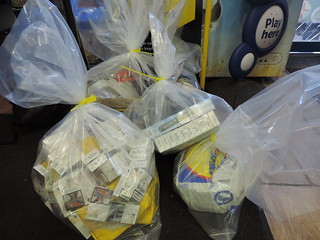 Neil McLoughlin, prosecuting on behalf of Buckinghamshire and Surrey Trading Standards, told magistrates that when asked by officers, Singh denied having any illegal tobacco products in his store.

The sniffer dog went on to detect three caches of cigarettes and tobacco – one hidden behind a kick board under a sink unit at the back of the shop, another behind some grilles on the front of large fridges used to stock beer and wine and a third in the cash till.

A fourth cache of products was found by trading standards officers in Singh’s car parked outside the shop.

Singh pleaded guilty on 21 April to one count of possessing 132 packets of counterfeit Marlboro cigarettes and two counts relating to 182 cigarette packets and 128 tobacco pouches which carried no statutory health warnings.

Lionel Blackman, defending Singh, said the shopkeeper was of previous good character and had come to the UK having fled the Taliban in Afghanistan.

Steve Ruddy, head of service at Buckinghamshire and Surrey Trading Standards, said: ‘The trade in illegal tobacco damages people’s health and undermines reputable businesses and we will take firm action whenever we can against those involved in it.

‘We act on intelligence from the public and I would urge anyone with information about premises involved in this harmful activity to report it to us.’

Anyone with information about illegal tobacco or who has any other consumer concerns should contact 0345 040506.