Surrey has slowest rush hour roads of any county in country 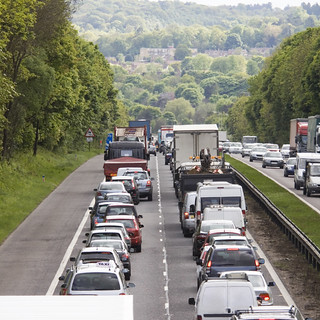 Surrey has the slowest rush-hour roads of any county in the country with average speeds dipping as low as 14 miles per hour, official figures reveal.

During the morning commute, motorists travel an average speed of just over 22.5mph on Surrey’s A roads – more than 18mph slower than the county with the fastest roads* and nearly 7mph below the county average.

According to Department for Transport (DfT) statistics, the average morning speed of the A317 westbound between Weybridge and Chertsey towards the M25 was just 14.5mph in June – making it the county’s slowest rush-hour road.

Surrey’s second slowest stretch of road was the A2022 going towards Epsom, where morning speeds only reached 15.3mph.

The congestion news comes after Surrey County Council wrote to the Government calling for action to prevent the county’s 3,300 miles of roads missing out on a new highways fund from Vehicle Excise Duty.

Chancellor George Osborne announced the fund in his latest Budget but the county council revealed the small print indicates the money will be used for motorways and major A roads managed by Highways England, which account for only 100 miles in Surrey.

Surrey County Council’s Cabinet Member for Highways John Furey said: “These average speeds reflect the sheer volume of Surrey rush-hour traffic and are proof that congestion has an enormous impact on our roads but unless the government acts to change the new vehicle tax system money to invest in getting traffic moving faster at peak times is going to take a detour around Surrey.

“That isn’t what the county’s motorists deserve, given that they generate £80 million more a year in Vehicle Excise Duty than they ever get back in roads funding and government funding for our highways is falling by £1m a year.”

A full list of average speeds on Surrey’s roads for the morning commute can be found on the DfT website.  The map below reveals the 10 slowest Surrey roads during the morning rush-hour.

* DfT figures include metropolitan counties that were abolished in 1986.